A Lego toy is a child’s bestfriend.  It makes the child’s eyes twinkle with delight whenever it touches and plays with it. Does that make sense? Yes it does because it is not just a “toy” without a purpose but it is something that can ignite child’s imagination and creativity.

I have the same feeling when I was still very young.  I love LEGO bricks that come in a vast range of shapes and sizes and I personally collected a few as gifts from relatives or through my parents who bought it for me.

What is the real meaning of its name? Lego is an abbreviation of two Danish words, “leg godt” which meant, “play well”.  It was founded by Ole Kirk Kristiansen in 1932 who was a carpenter from Denmark.

The popularity of Lego toys could never be stopped.  From one generation to another, it is steadily growing and opening more stores globally.

We are lucky to have this store opened in our city since it has been the second store in Mindanao and the 7th in the Philippines.

The founder’s dream was to inspire and develop the builders of tomorrow thus, it continues to expand worldwide.  In the Philippines, it became a hit and a lot of Lego lovers are very excited of what new types of toys or merchandise it offers.

Before the formal opening of the Lego store at Abreeza Mall, there was a brief program for the invited media and special guests to introduce what is in store for Dabawenyos and it’s campaign to make the world, ”Better With Every Brick”. There was also an exciting game for the mommies and their children called the “guessing game” with the use of the Lego bricks. 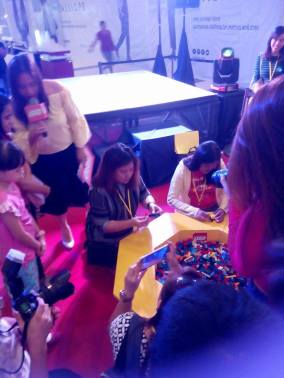 This store is not only concerned with its huge profits in the industry but is willing to give back the blessings by working together with UNICEF Philippines in order to build the first National Centre for Children with Disabilities in Philippine General Hospital.  UNICEF Philippines supports the welfare of the children and so is Lego.  A portion of the sales from Lego Certified stores in the country will be donated for the construction of the center aside from issuing a check worth P500,000 as a fundraising drive.

Ms. Sharlene Ortiga, LAJ Marketing Retail Manager, announced the good news that Lego store in Davao City will have exclusive items not available in other stores.

LAJ Marketing Philippines is part of the ALJ Group of Companies.  It is the exclusive distributor for LEGO merchandise here in the Philippines.

I was caught by surprise as I saw a lot of Lego toys of different sizes and types that filled the huge room.  Believe it or not, I felt like a kid at heart. All the children shouted as they were delighted to see the toys displayed around them. They picked the toys of their choice and presented these to their parents excitedly.

A Lego Certified store is the only one that offers unique features to encourage the builders of tomorrow using their creative imagination and skills:

For comic fans, you can expect an exciting and innovative LEGO Brickheadz line.

Batman, Batgirl, Joker, Robin, Captain America, Iron-Man, Black Widow and Hulk will be at your fingertips starting this month and more new character will be released in the coming weeks ahead.

Finally, with a purchase of LEGO poly bags that feature four different designs, LEGO Super Heroes, LEGO Star Wars, LEGO friends and LEGO City lines @ P100.00 each, you can already give support to the fundraising campaign for National Centre for Children with Disabilities by donating 100% of the proceeds from the sale of each.

Bring your kids and friends who love Lego and give them that full Lego experience. Where else? To the Lego Certified Store, Ground Floor at Abreeza Mall.